The Niagara Falls and one of the most happening cities in the US, New york city, are the most sought-after places for anyone who lives in the United States….
As with all others, I started planning this trip from Florida, thats where I live now.I want to describe all the hows and wheres of this trip rather than quoting my experiences in it.You know why!!! Because I had a tough time planning it and googled a lot to make this trip economical and wonderful…..

1. The flight tickets are usually very costly during long weekends. So I tried looking out for tickets for other days.Hurray!!Tickets were cheaper.
Before deciding on that, I browsed if there are other airports near my place and the destination airport(not-so-commercial ones).I found a St.Pete-Clearwater airport near my place(where only 2 airlines ply) and one in Niagara Falls city(15 mins from the waterfalls).The prices from and to these airports were far lesser than the famous large commercial airports.
Take a guess on the ticket prices….(It was $69 from PIE to NIA one-way)..
Now, for a return flight ,I chose a different destination as I was not gonna stay in the falls area during the whole weekend.Yet again, found an airport close to New York(Trenton Mercer airport where only Frontier Airlines ply).Tickets were 89$ per head from this place to Tampa.

Now there were no second thoughts. I went straight ahead and booked the tickets to and fro.It was a non-stop flight too.(2 hours and 40 minutes)
References: allegaiantair.com and flyfrontier.com

2.There I was in Niagara at 11.40 am. NFTA buses take just 25 minutes to take you to the attraction for a price of $2 per person.Just in time to get into a bus.There are buses running every half n hour right outsiide the airport.
References: http://metro.nfta.com/routes/ and maps.google.com(to know the bus stops near the waterfalls).Google transit is good too.:)

3. What to do in Niagara?
The Maid of the Mist(Cost:$14.50/per head) is what generally is popular.This is the ferry ride to the Niagara Falls.If you are someone who wold love to get drenched in the waterfall, then I would suggest you visiting the “Cave of the Winds”. (Cost:$11/head)This was super fun. If it is not so crowded and you have time, feel free to experience both of them.
Once this is over, you can walk down or take a Niagara State Park shuttle pass and visit the Bridal Veil Fall, American falls, Luna Island,Horseshoe falls, etc…
After visitng all these places, we headed to the NSTA bus stop again and took a bus to Greyhound bus terminal.The journey from Niagara Falls to Newark Penn Station was about 7 hours in a Greyhound bus.I dont have great reviews about it, but its definitely good for $44 per head.

Take the NJTransit rail from Edison station(where we stayed) and reach WTC. Thats the last stop of the journey.As you walk out of the station, you ll be taken aback at the crowded streets of New york amidst the tall towers right in front of you with narrow roads in between.Quickly walk through the 9/11 Memorial site through the Wall street(take some pics near The Bull), and then head towards the Straten Island ferry.Take this ferry anf you ll get a glimpse of the Statue of Liberty on the way.Take a return ferry from Straten Island back to where you had started. You can plan your lunch time accordingly.There are a lot of INdian restaurants to try out.Unfortunately we were late for lunch after our visit to the island, we had to help ourselves with Subway.:(.

Then we took the subway train near Straten Island to reach 42nd street.This is THE STREET of New York…Times Square. Walk through the streets to and fro till you get satisfied with New York. We walked all the way till Central Park where you can find greenery amidst thew hustle of the city.
Then we headed towards the Empire State Building at around 7 pm. The best part of reaching this place at 7 was that we were able to get a view both when it was bright as well as after dusk.

Last but not the least, we ended the day by walking on the 42nd street yet again to watch the colorful lights
and the happening crowds of New york one last time.
5. The next two days were spent in Clementon Water Theme Park and a lazing day at home.Had a wonderful time with a few friends.

Thus ended our New York trip. Hope this post will be helpful for a first-timer who wants to go to New York. 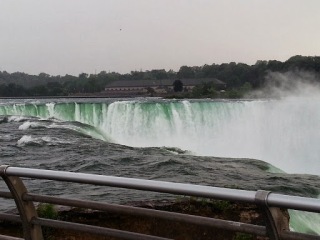